Why is your chatbot taking longer than expected to be deployed?

When chatbots were first introduced, they were rather rudimentary. They came with a set of pre-installed phrases and trigger-words that enabled the Bots to respond with relevant data. However, a slight variation in tone or verbiage would result in fallback messages or errors.

Analysts would scour through thousands of documents and datasheets to amass the right content, which would then be handed over to the developer.

Earlier bots relied on pre-built phrases & trigger words only. This led to inaccurate and not-so-useful responses.

Analysts would scour through thousands of documents and datasheets to amass the right content, which would then be handed over to the developer.

The developer would then key in these intents into the Bot or into a chatbot platform to serve as samples/triggers for the Bot to formulate an accurate response. Up to this point, it all seems very straightforward.

Intent-based bot building became all the rage. But, it had its own pitfalls:

However, we failed to realize a hidden complexity! The very creation of this knowledge base (intents) in itself is a herculean task that’s ignored as an inconsequential step across the Bot building journey.

To help put this into perspective, I’d have to break down the actual effort that goes into this step.

When a Bot is in the initial stages of development, the user first needs to determine whether the Bot will remain as a simple FAQ Bot or indulge in more complex conversations. In the case of just a simple FAQ Bot, data-retrieval models work perfectly. Choose the question that is matched with an adequate response. Easy as punch!

However, for businesses that required more complex conversations (such as Healthcare, Logistics or Finance), the variations in verbatim corresponding to a singular requirement pose a serious hurdle.

For example: Take the case of a Logistics Provider that employs a chatbot to engage with customers. For a task as simple as finding the status of an order, the customer can pose the query in numerous fashions.

‘What’s the status of my order?’

‘When will my order reach me?’

So on, and so forth. You get the gist. Furthermore, like how I mentioned verbiage earlier, the word ‘order’ can be replaced with synonyms such as parcel, gift or even delivery. And this is just one single query. A regular run-of-the-mill business or enterprise would have to face dozens of queries related to multiple service offerings.

As the business scales, so does the effort required in building and maintaining the knowledge base for chatbots.

As the scale of the business begins to climb, so does the effort required to build this knowledge base for the chatbot/virtual assistant.

Hence, it doesn’t surprise me that most Conversational AI providers fail to deliver on their promise of providing a quick-deployment solution!

The current average implementation and go-live duration for chatbots is 6-8 months.

The average deployment time for an intelligent Bot across a business vertical can range from anywhere between 6 – 12 months. In today’s day and age, 6 – 12 months isn’t an acceptable nor viable option. This prolonged delay is directly attributed to the time taken to create this knowledge base.

We’re talking hundreds of hours to accumulate relevant content data for response formulation, followed by the heavy dependence on developer effort to hard-code the intents.

What if I told you that there was a way out of this dilemma?

With the help of a single click, you can automate the creation of this knowledge base.

Not really! With the technology that is available at our disposal currently, we can hit two birds with a single stone.

We have created a platform that allows you to create a knowledge base with a single click, as well as create a system where conversational content is routinely updated without the need for a Developer or Backend Engineer. 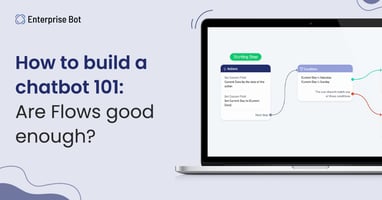 How to build a chatbot 101: Are Flows good enough?

The most ideal way to bootstrap your chatbot building process is to employ ‘Flows’, where the Bot... 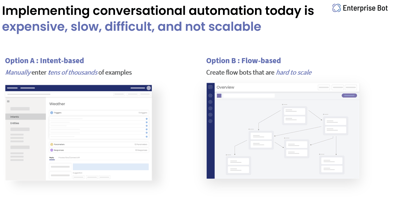 Building a Virtual assistant for your enterprise can be tedious, expensive and resource intensive.... 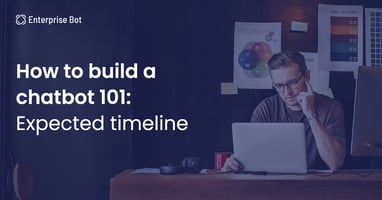 How to build a chatbot 101: Expected timeline

“How long will it take to build and deploy my chatbot?”